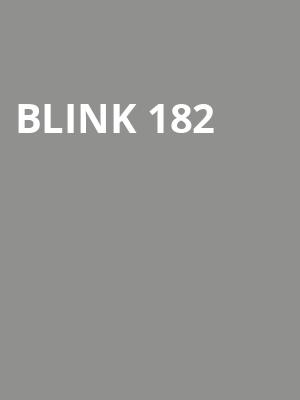 90s legends, Blink 182 are heading out on their first major tour since 2015 - and joining them is original member Tom DeLonge! This huge reunion will see Mark Hoppus, Tom DeLonge and Travis Barker sharing the stage once again in support of their new single. Expect to hear new material along with their nostalgic, fan favorites including 'All The Small Things', 'What's My Age Again?' and 'Adam's Song'. It's going to be one night you don't want to miss!

Blink 182 hit the Southern California Pink Scene in the early 1990s and quickly rose to fame due to their high-energy and incredible live performances alongside their lyrical humor.

Their defining moment which cemented them as legends of the 90s/00s was 1999s Enema of the State album which featured hit singes 'What's my Age Again' and 'All the Small Things'.

In 2016, after reforming, losing bands members and welcoming new ones - Blink 182 released the album California which, upon release, went on to become the bands second number one album in 15 years. The album featured singles 'Bored to Death' and 'Good Old Days' - but is mostly celebrated by Blink due to earning the band their first nomination for Best Rock Album at the Grammy Awards. Now the Blink 182 flame has been reignited!

You may be required to wear a mask during this performance. Please contact the venue directly for more information.

About Hershey Harrisburg Theatre: We are an independent show guide not a venue or show. We sell primary, discount and resale tickets and prices may be above or below face value.

View all times and dates

Sound good to you? Share this page on social media and let your friends know about Blink 182 at Hersheypark Stadium.